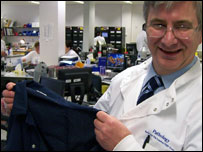 Pyjamas and bed linen made with silver cloth are being trialled in a hospital to help combat the MRSA superbug.

Experts at Barts and The London NHS Trust hope to prove that silver can be used to clear MRSA on the skin and thus protect vulnerable patients.

The specially created fabrics will be used at the Lister Hospital in Stevenage, Herts, over the next year.

MRSA is a bacterium that can live completely harmlessly on the skin of healthy people but can lead to serious infection if it enters the blood stream.

Dr Wilson, a consultant microbiologist, said: “Silver is known to be a very efficient agent against infection and also very safe.

“These trials will mean we can prove its effectiveness.”

He said it was already used in medical plasters and washing machines so this was the next “logical step” and that it would help cut costs.

More than 300 people who have tested positive for carrying MRSA on their skin will be recruited for the trial which began this month.

Half will be given silver-lined pyjamas and linen while the rest will receive standard hospital gowns and bedding.

The results of the two groups will be compared to see if the silver materials led to increased MRSA eradication.

It is hoped a second trial will then be run at The Queen Elizabeth Hospital in Woolwich, south-east London.

Patients will not receive any additional antibiotics or treatments to remove the MRSA from their skin, so it is hoped the tests will reveal the efficacy of the silver option.